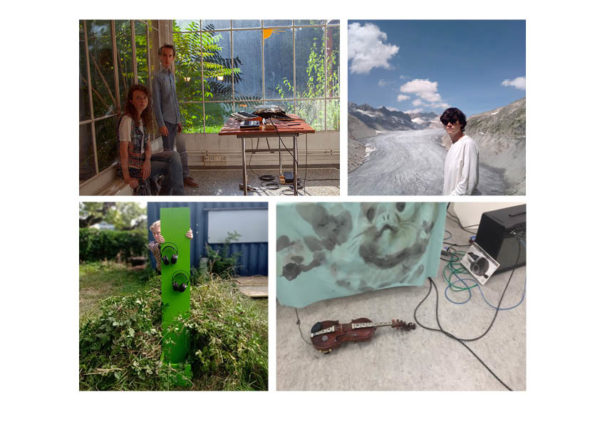 Embassy of Foreign Artists is pleased to invite you to meet 5 artists currently in residency and hear them perform on Thursday September 26 from 6pm – Rue Subilia 45, 1227 Carouge.

As practicers of contemporary classical music, we have always endeavored to create music that escapes categorization. During this residency, we tried to question even more definitions within our practice: the defined borders, most of the time invisible, between what is an instrument and what is not; between performer and instrument-maker; between places where music is supposed to be and where is not.Mainly making use of scrap materials, we created a portable set up of instruments, coupled with electronics. Despite all their idiosyncrasies, these handmade instruments become a human-like, resonant, and sympathetic organism. After constructing this setup, we proceeded to compose new music that plays with the transition between what is clearly and physically struck, and what is more invisibly activated. Throughout the work, a structural process takes charge of the piece until there is a moment of freedom to explore the inner qualities of sounds, where electronic improvisations still bear an echo of the instrument’s acoustic origins. Once more, the project is about exploring limitations, like a limited amount of pitches and rhythms, or an imperfect set of homemade instruments. Our hope is that we will be able to continue this research, also featuring other materials while working in Shanghai in the future months.

“[…] the challenge is to create music, starting, in so far it is possible, from a minimum number of premises but which would be ‘interesting’ from a contemporary aesthetical sensitivity, without borrowing or getting trapped in known paths”. [I.Xenakis]

The research work that Estelle Jullian has developed over the past 3 months focuses on the importance of sediment movement in our global ecosystem. In this sense, Lake Geneva, the Rhône and the Mediterranean have been his main subjects of study. As part of the residence, she undertook a journey that took her up the Rhône from the Camargue to the Rhone Glacier and the EoFA was her centre of operation. Throughout this process, she collected small quantities of sediments of different types: sand, silt and clay, with which she produced small performances and objects. In a way, it is inspired by the scientific method to thwart it and introduce elements of fiction. This work proposes a polysemic and poetic vision of the territory by generating a physical relationship with the materials treated. It also highlights the notions of cycle and causality in the construction of our environment.

His trip was also punctuated by meetings with different types of actors such as specialists from the Rhône Sediment Observatory and the Forel Institute, the ceramist Anja Seiler but also the Geneva Navigation Brigade and the Geneva Underwater Sports Centre.

This day will be an opportunity to open the door to the workshop and discover the publication, which is presented as an archive of the research process.

Voices, ambient sounds, live strings and familiar repeating melodies morph and dissolve into synthetic water. Informed by aural tradition, she finds pace in a flexible rhythmic framework of endlessly shifting bowing patterns. At times, she takes on the dual role of choir member and ghost producer of a Mouse Chorus. Shapeshifting melodies tune listeners into the softest clicks, whistles and squeaks of tiny voices. Each voice imitates and harmonizes with its surroundings, recalling early American fuguing tunes.

Before the concert, Elise will lead a song-walk around the Embassy of Foreign Artists, taking cues from catchy melodies, echolocating mammals, and choral arrangements. The singing walk will pass the Geneva Freeports and Bypass Club before returning to the beehives behind Maison Baron.

represents her artistict work in a form of a performance (viola da gamba, voice, field recordings) and an installation (text, recordings) she calls „symbiotic events“. She has been asking questions like what does it mean to make music collectively, or/and in a non-hierachical way. She has been inviting geneva-based musicians for sessions of discussion and musicmaking to explore the subjects. Inspired by the lovely garden of the maison baron with all its inhabitants, combined with a reading of texts by Donna Haraway, she has been compos-t-ing some music for multispecies players.