Oliver Musovik is conceptual visual artist from Skopje, Macedonia.
Graduated from the Faculty of Fine Arts in Skopje in 1997, MFA in 2004.

He had participated at numerous international exhibitions, among others AFTERMATH – Changing Cultural Landscape, Tendencies of engaged post-Yugoslavian contemporary photography, Ljubljana and touring Europe; HISTORY, MEMORY, IDENTITY: Contemporary Photography from Eastern Europe in Modena in 2009; the 3rd Bucharest Biennale in 2008, 1st Biennale of Contemporary Art Heterotopia in Thessaloniki in 2007, The Gorges of the Balkans in Kassel in 2003, Manifesta 4 – European Biennale of Contemporary Art in Frankfurt in 2002, 6th Istanbul Biennale in 1999. His works are part of several public collections like the Museum of Contemporary Art, Skopje; Museum of Modern Art, Ljubljana; National Museum of Montenegro, Cetinje; Fondazione Cassa di Risparmio di Modena. His works have been published in art magazines and books, including Autobiography (Thames and Hudson, 2004), Vitamin Ph – New Perspectives in Photography, (Phaidon, 2006), Photo Art, Photography in the 21st. Century, (Dumont 2007 / Aperture, 2008).

People and objects from his immediate surrounding are in the main focus of the Oliver Musovik’s artwork. Observing the simple ordinary actions, systematically recording them and interpreting the interesting, unusual and hidden correlations, often acompanied by short stories, anecdotes in his artwork is Oliver’s basic principle of work. In these small dealings he tries to identify and speculate on concepts and behaviors that apply to the wider socio-cultural context and on more personal level, to his identity.
Mostly, he works with photography and short narrative structures from everyday life joint in photo-with-text layouts, but also with spatial installations, drawings, objects.

Within the stay at the EOFA he is hoping to work on two projects – a photography based project of public space, exploring informality and unveiling embedded social conditions and contradictions of the city, and a more complex personal project on the notions of land ownership and land use. 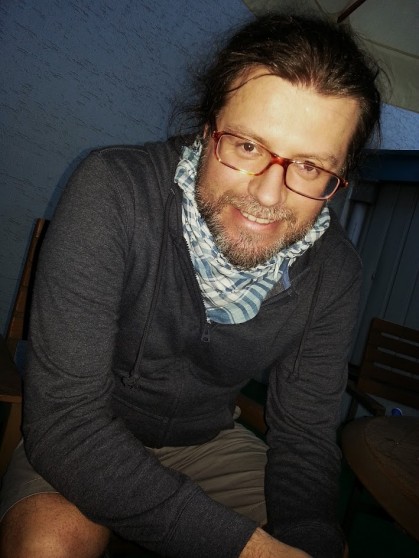