Hilaire Balu Kuyangiko obtained a degree in fine arts at the Kinshasa Academy of Fine Arts and collaborates with Kin Art Studio (KAS). After graduating, Balu immersed himself in traditional woodcarving techniques used in the sculpture of ancestral figures. His multidisciplinary practice is based on the reappropriation and contextualization of aesthetics and the philosophy of ancestral myths / Kongo at the crossroads of world iconography referring among other things to the symbolic languages ​​of contemporary power, to the history of Western art and to popular culture conveyed by contemporary globalization. Indeed, his approach seeks to reveal the consequences of colonialism and globalization on both individual identity and collective African identity. The goal of my practice revolves around a harsh criticism of the violence done to African civilizations by colonization and neo-colonialism. On the other hand, his work describes how the ancient deities Kongo are today transformed from what he calls the “new gods” of the consumerist world symbol of “capitalist chaos” characterized by characters from the Marvel and DC comics and from the Disney universe, etc.
His work has been presented in various exhibitions such as “Kinshasa 2050” organized by the French Institute of Kinshasa, “Congo Star” in Austria at the Graz Museum, “Kinshasa Urban Chronicles” in France at the MIAM Museum in Sète, ” Young Congo “at Kin ArtStudio in Kinshasa. His works were acquired by the Wits Art Museum (WAM) collection in Johannesburg during his residency and his solo exhibition in 2018 called “Old Gods, New Enigmas” organized by Wits University of the Department of Art History.

For my residency in Geneva I will explore my project entitled “Make or Die: Beyond Reality” a project that aims to cross and interpenetrate two forms of knowledge: on the one hand the appropriation of the leaders of works of Francisco Goya with his work “El tres de mayo” and Eugène Delacroix with his work “The massacre of Scio” which translate the idea of ​​the massacre and the resistance of the people. On the other hand, the reappropriation of the Nkisi Mangaaka / Kongo philosophy interpreted by the Ntandu and Ndibu, whose charged statuette embodies a supernatural power to fight and resist spiritually against the negative spirits that attack the community.
Indeed, these two forms of knowledge intertwine to face this social tragedy that crosses the Congolese population. Violence in our society is endemic and pervasive. Today, undeniably, the bodies of Congolese are affected because of the natural resources of which the country abounds and which attract greed. “Make or Die: Beyond Reality” reinvents and re-contextualizes these two pieces of knowledge to challenge the perception of the dominance and savagery of the consumerist system that physically, spiritually and culturally destroys the value system of Africans in general and the Congolese people in particular. This project consists in representing an installation between painting, sculpture and engraving that confront each other: it consists, on the one hand, of representing four paintings reinterpreting the masterpieces quoted above by inserting the current situations of the Congolese in the historical context of these paintings while contrasting the roles of each character and giving a heroic and humorous character to the victims of the massacre. These characters will have an inscription of the different symbols of power on their clothes. On the other hand, these paintings will be connected to each other by different Nkisi statuettes.
This project submitted for the residency at EOFA Geneva tries to reinvest the history as a base that comes to adjust and support the current reality of Congo (DRC) while questioning our particular vision of the news and the place of art in our current situation. 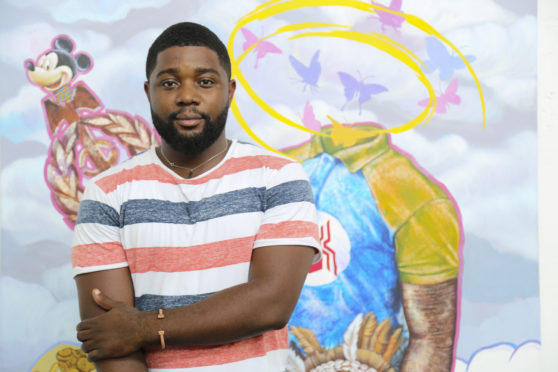