After studying graphic design at the Arts Décos in Paris and at the École supérieure d’art appliqué Duperré, Juliette Mancini made a bold career choice and dedicated herself to comics. In 2014, she won the 2nd Young Talent Award at the FIBD Angoulême. In 2015, she co-creates Bien, monsieur., a somewhat political, somewhat philosophical and somewhat funny, comic magazine, winner of the Fauve de la BD Alternative at FIBD 2018. In 2016, her first album, De la chevalerie, published in Atrabile: a dive into a medieval world, patriarchal and corrupt, surprisingly similar to our society. Juliette works in Paris and divides her time between graphic commands, comics writing and teaching.

A painter wanders through a colorful and vegetal landscape which reminds us of California. He spends his days paintings characters lying on hot beaches or relaxing in their whirlpool. All of the sudden something unexpected happens – a grief, an illness or an accident – and in the glimspe of an eye the world seems to be collapsing around him. Thus begins his depression. In a society where only happiness is acceptable, and where one controls his emotions with Xanax.

From this synopsis, I want to develop a work on different media (comics, painting, ceramics) and start a reflection on the injunction to happiness.

In a society of performance and consumption, what can one do when the desire leaves ? Selfies galore, statistics to no end, all in this life must be calculated, scrutinized, categorized. How can one escape the race for success and avoid falsified happiness ? 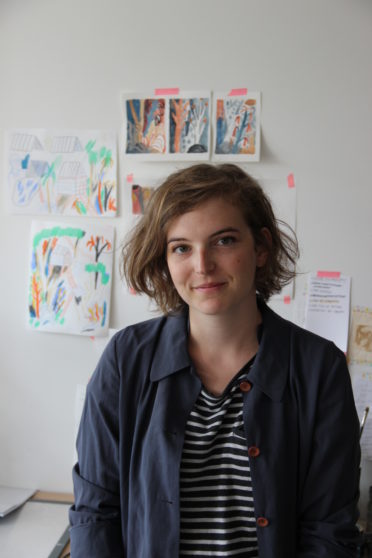