*1992 in Pittsburgh (USA), lives and works in Pittsburgh
Residency period : October to December 2018
Composer and performer

Active as a composer and performer, Molly Joyce’s music has been described as “impassioned” (The Washington Post), written to “superb effect” (The Wire), and “vibrant, inventive music that communicates straight from the heart” (Prufrock’s Dilemma). Her works have been commissioned and performed by several distinguished ensembles including the New World Symphony, New York Youth Symphony, Pittsburgh Symphony Orchestra, Milwaukee Symphony Orchestra, and the New Juilliard, Decoda, and Contemporaneous ensembles. Additionally, her work has been performed at the Bang on a Can Marathon and VisionIntoArt’s FERUS Festival, and featured in outlets such as Pitchfork, WNYC’s New Sounds, Q2 Music, I Care If You Listen, and The Log Journal.

As a performer, Molly often plays on her vintage Magnus toy organ, an instrument she bought on eBay and has performed on in multiple capacities; including solo, with toy piano, and with a beatboxer. She is additionally active as a DJ, spinning under the moniker “DJ MJ”. 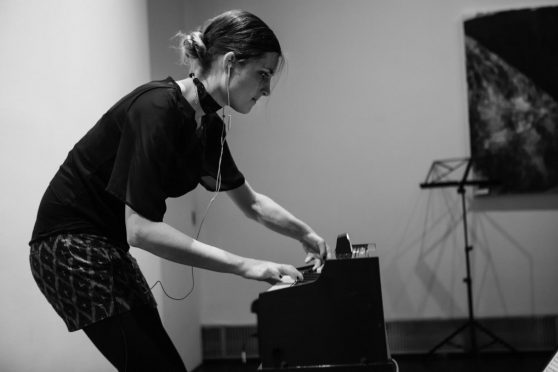