Artists Rosalie Schweiker and Maria Guggenbichler have been collaborating since 2005 in the genre of humorous conceptual art. Throughout the ten years of their collaboration the two artists have not lived in the same places or cities and have often worked together over long distances, using the bleak communication tools of emailing, constantly interrupted skype calls, dodgy google documents etc. During their residency in Geneva, Schweiker and Guggenbichler will turn off their computers and simply enjoy the pleasures of hanging out together, meeting new and old friends, strolling the city, and sleeping until 11am (at least).

2015 also happens to be the 10th anniversary of their friendship and the two artists will use the residency to revisit their past collaborations, laugh about their unrealised ideas and revel in their achievements, such as their now-iconic first work Spaghetti Bolognese (2005), the Eiscafe Venezia manifesto, the Keep Going! Prize, the watercooler manifesto and many more classical pieces. 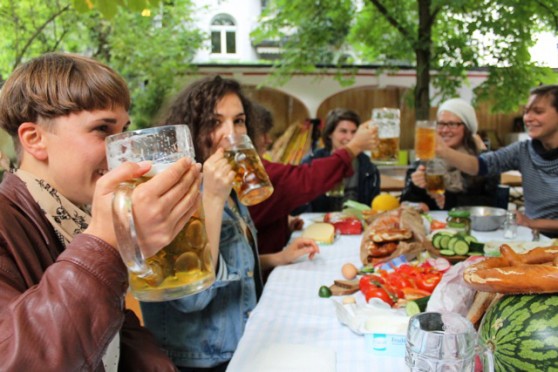