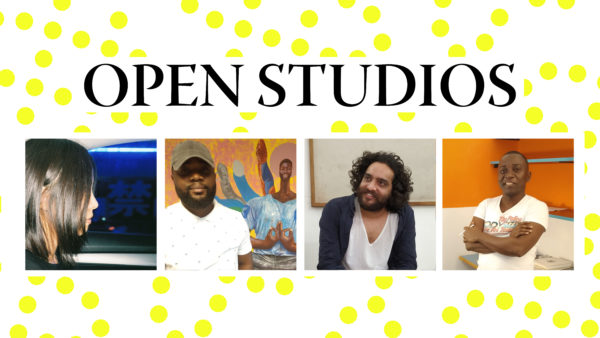 Embassy of Foreign Artists is pleased to invite you to meet 4 artists currently in residency and discover their works on Tuesday June 25 from 6pm – Rue Subilia 45, 1227 Carouge.

HILARY BALU *1992 in Kinshasa (Democratic Republic of Congo), lives and works in Kinshasa. Hilary Balu continues his exploration of international capitalism and its ramifications around the world through large-format paintings, combining Congolese cultural traditions and Disney or Marvel icons that constitute new gods of cultural colonialism and economic domination. Link – full biography

YVES SAMBU *1980 in Lukula (Democratic Republic of Congo), lives and works in Kinshasa. Yves Sambu is a multidisciplinary artist and the founder of the Sadi collective in Kinshasa. He is strongly linked to the Sape movement he has been following for several years. He is also interested by non-academic forms of creation and teaching methods. He is preparing a monumental work in pearls, which presents riddles of the Geneva conventions, ghosts of colonialism and anti-personnel mines. Link – full biography

SHAILESH B.R. 1986 in Segara (India), lives and works in Dehli. The Indian artist Shailesh B. R. has produced a serie of machines in the framework of the Sanskrit language that he has been studying for many years. As a self-taught handyman, he is fascinated by the electricity and the motors he discovered as a teenager. Each mechanism is a metaphor inspired by sacred texts that is articulated in a strange poetic vocabulary. Link – full biography

From June 28 to June 30 BIG – Biennale Interstellaire des espaces d’art de Genève ➤ During this weekend of exploration and sharing, Shailesh B.R. will represent Embassy of Foreign Artists. The BIG program gather more than 70 art spaces, collectives, and associations that are represented through a multitude of unusual, fabulous and unseen propositions!