Residency period: May to October 2020

The work of Guerreiro do Divino Amor (1983) explores super-fictions, which he consider as occulte forces that influence the construction of the territory and the collective psyche. He builds a universe of science fiction based on elements of reality using films, publications and installations. His work has been presented at the Center for Contemporary Art in Vilnius (Lithuania) and at the Iberê Camargo Foundation in Porto Alegre (BR) among other places. His works are part of the collections of MAR (Art Museum of Rio), MAB-FAAP São Paulo (Museum of Brazilian Art) and the Museum of Art of Pampulha (Belo Horizonte). He was finalist of the 2019 PIPA Brazilian Contemporary Art Prize and holds a Master’s degree in architecture from the School of Architecture of Grenoble and La Cambre Architecture (Brussels).

My proposal for the residence at EOFA is to realize a new chapter of my project “World Superficial Atlas”, a megalomaniac research project that I started in 2005. The project studies how fictions of different nature, be they geographical historical, social, media coverage, political or religious, interfere with the construction of territory and influence the collective imagination. Each territory needs a new perspective of research and a new super-fiction. The super-fictions interact with another and become oneanother. The approach is based on iconographic and historical research, sociological field observation, symbols of public space, and images produced by the mass media.

The first chapter The Battle of Brussels describes the war between two antagonistic civilizations, the empire and the galaxy, for the control of the city of Brussels and the souls of its inhabitants. The second chapter SuperRio describes a superficial ecosystem encased in the hedonistic effervescence of the pre-Olympic Rio de Janeiro. The Supercomplexo Metropolitano Expandido creates a superficial machine of success and an expansion in the infinite productivist concrete jungle of São Paulo. The fourth chapter The crystallization of Brasília investigates from a historical angle the development of mystical rationalism and its influence in the construction of the Brazilian neocolonial superfictional narrative.

Geneva and the Swiss territory seems like a utopia from science fiction to me. A mutant yet natural and deeply artificial territory. An isolated idyll as well as a key element in the geopolitical and economical landscape. The new chapter Helvetia explores the superfiction at work in the construction of the collective psyche ot the Swiss national identity and studies the occult forces that move its bowels. The project proposes a contemporary reinterpretation of the mythological figure of Helvetia, The Goddess Mother and unity symbol of Switzerland, and other cantonal allegorical divinities (Berna, Genava, Basilea, Tigurina Virgo, Argovia) mingled with new deities (Uricha, Inanza, Nidustia, Atternhornia etc …) asking the question of what would be the actual divinities and the sacred values ​​of Switzerland today. The project, built around Helvetia, proposes an idea of the Swiss cosmogony: a pantheon of deities each embodying an aspect of the Swiss collective imagination, its different territories and their characteristics. The dresses, coats and adornments of the deities fold and merge, forming the superficial landscape of the country. But behind the scene appears the underground interaction of deities with parallel realities outside the Swiss Olympus. During these three months of residence I plan to start building the temple of Helvetia where these allegorical deities will materialize. 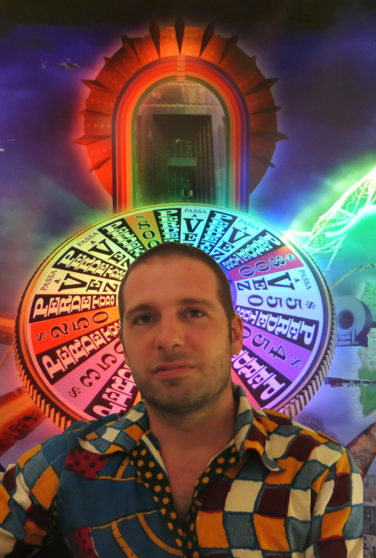