‘Through painting, I depict fictional and occasionally fantastical scenes that initially explore the blurred sense of time and place within memories. Dreamlike interiors and landscapes incorporate familiar elements of life that both stylistically and symbolically can either represent a quasi-nostalgic ordinariness or an improbable world. The isolation and dislocation of people and objects, and the exploration of subtle spatial relationships, recall the hazy state of dreams in which certain details become dominant while others fade away into the unconscious.

I begin each new work by gathering a large collection of source material. I make photography central to my work, whether by using found imagery, or by taking photographs I compose specifically for a painting. In constructing the painting, I use combinations of these reference images to fabricate an open-ended narrative with the emotion of a memory. The resulting paintings can be both realistic and subtly uncanny, for example, a surreal theatre recalling an idealised vacation or a deep personal longing for past experiences.

In doing this, the narrative that has become most associated with my work draws upon personal interpretations of the human psyche. Using figuration as a vehicle, I can now accompany the use of memories alongside motifs such as how humans interact with each other through body language, as well as exploring inner states such as loneliness, anxiety, and togetherness. Repetition of themes, a fascination with costume and masks, symbolic objects in relation to the figures, and producing work in a series to reinforce a visual language are important aspects of my current practice.’ 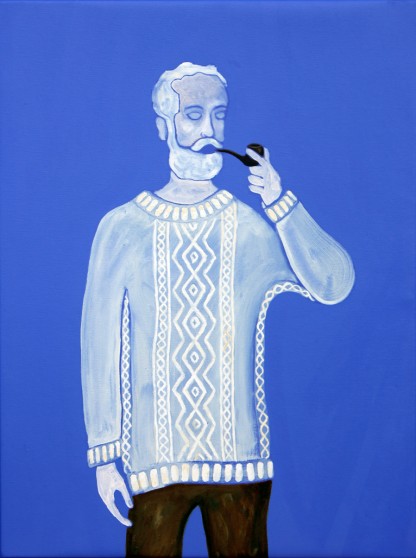