In collaboration with Pro Helvetia Johanessburg

Zen Maris is an artist who works in a variety of media. Core to his practice is a concern with how meaning is formed through different media, spaces and processes. While working from a position that begins with photography and film making he increasingly works in performance, sculpture, graphic processes and writing. He has engaged with many thematic areas of focus, including international sport, identity, nationalism, and public infrastructure, the binding link between these diverse areas has always been the relationship between power and its subversion.

Over the years, he has circulated through various institutions, such as the Market Photo Workshop (1995), he received a BAFA (with distinction) from UCT (2001), he attended the two year studio program at de ateliers (stichting 63) in Amsterdam the Netherlands (2003) and additionally received a Masters in Cultural Analysis (with distinction) at the University of Amsterdam (2006). He currently live and work in Johannesburg, South African, where he is a Lecturer in Fine Art art at the WITS School of Art, and is also a PhD candidate in a practice based PhD working between the WITS School of Art, the WITS Institute for Social and Economic Research (WiSER) and the Institute for Creative Arts (ICA) located at UCT in Cape Town.

Currently Zen Marie is furthering his investigation into the post-colonial subject with Dutch Surinamese artist Dimitri Madimin. Together they founded the Sugar Free Movement that aims to reimagine colonial histories as processes for remapping critical and subversive perspectives in the contemporary. It develops around an international network of artists, musicians, theorists, performers, activists and other agents who either lack or refuse categorization. During his residency in Geneva, a performance supported by Pro Helvetia and the Mondriaan Fund took place in the framework of the BIG Biennale. The performance was a collaboration between Sugar Free and Pungwe, two collectives whose practice is centered around issues of political and creative urgencies with graphic, live and sonic methods of activism and performance. Central to both collectives is a concern to critically explore narratives and creativity that go beyond the confines of conventional colonial or even post colonial histories (more information – www.sugarfreepungwe.wordpress.com). 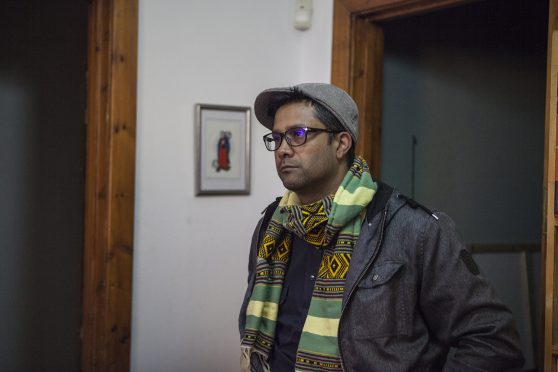